Conducting ePCTs in AD/ADRD within HCS requires unique research skills, yet the field is relatively nascent. The number of investigators capable of rigorously designing and executing ePCTs in partnership with HCS and other key stakeholders remains limited, and those that have intersecting expertise in AD/ADRD populations are even fewer. Thus, a critical objective of the IMPACT Collaboratory is to build the nation’s capacity to conduct impactful ePCTs in AD/ADRD by training a workforce of investigators prepared to carry on this work well into the future.

The IMPACT Collaboratory funds two to three career development awards (CDAs) annually. These CDAs seek to support the development of early-stage MD, PhD, or equivalent researchers who seek careers conducting ePCTs for people living with AD/ADRD and their care partners. The IMPACT Collaboratory prioritizes applications that address dementia care for people of all backgrounds and promote health equity.

Two optional informational webinars will be hosted to provide investigators with an overview of application details. Investigators will have the opportunity to ask questions. Pre-registration is required using the links below.

A set of frequently asked questions (FAQ) regarding this award is available at https://impactcollaboratory.org/CDA-grant-faq/.

CDAs are funded for two years.  Each award will provide $100,000 annually in direct costs with an indirect cost rate capped at 8%.

Applicants may apply for additional funds, up to $10,000 per year, to support their research project. Justification for requesting these funds is required as part of the budget justification. These funds may not be used for salary or stipend support for the Candidate, Mentor(s), Consultant(s) or Collabortator(s).

Awardees are required to devote a minimum of 75% effort toward the goals of the award.

Eligible applicants include an MD, PhD, or equivalent researchers who seek careers conducting ePCTs for people living with AD/ADRD and their care partners. Applicants must be no more than 5 years out of their post-doctoral training program at the time of application. With prior approval, rare exceptions may be made to waive this restriction for later stage investigators seeking to change their career path to pursue research on ePCTs among PLWD. Such applicants should email Christopher Callahan, MD, MACP, Training Core Leader, for prior approval at IMPACTcollaboratory@hsl.harvard.edu with the rationale for the requested waiver. Requests for approval should be submitted well in advance of the receipt deadline so that CDA Program staff can respond before the application deadline.

Applicants with more than 5 years of postdoctoral training who do not have prior approval will be administratively disqualified.

Individuals from underrepresented racial and ethnic groups as well as individuals with disabilities are encouraged to apply. Multiple PDs/PIs are not allowed for CDAs.

By the time of award, the candidate must be a citizen or a non-citizen national of the United States or have been lawfully admitted for permanent residence (i.e., possess a currently valid Permanent Resident Card USCIS Form I-551, or other legal verification of such status).  Candidates must have or be eligible for faculty appointments at academic institutions at the time of funding. Candidates and their home institutions must also agree to cede IRB oversight for all research funded by the IMPACT Collaboratory’s IRB (currently Advarra).

To better understand the basic concepts of ePCTs, applicants are required to view and read the following materials prior to preparing an application. Applicants must attest to completing and understanding these materials in their application:

At the time of award, the candidate must have a “full-time” appointment at the academic institution. Candidates are required to commit a minimum of 75% of full-time professional effort (i.e., a minimum of 9 person-months) to their program of career development activities during this award.

Candidates may engage in other duties as part of the remaining 25% of their full-time professional effort not covered by this award, as long as such duties do not interfere with or detract from the proposed career development program. Candidates who have VA appointments may not consider part of the VA effort toward satisfying the full-time requirement at the applicant institution.

Candidates must also participate in a two-day IMPACT Collaboratory Training Workshop and Retreat with your mentor in both years of the CDA in Bethesda, Maryland.

Before submitting the application, the candidate must identify a mentor who will supervise the proposed career development and research experience. The mentor should be an active investigator in the area of ePCTs for PLWD and their care partners and be committed both to the career development of the candidate and to the direct supervision of the candidate’s research. The mentor must document the availability of sufficient research support and facilities for high-quality research and mentoring. Candidates may identify more than one mentor, i.e., a mentoring team, if this is deemed advantageous for providing expert advice in all aspects of the research career development program. In such cases, one individual must be identified as the primary mentor who will coordinate the candidate’s research. The candidate must work with the mentor(s) in preparing the application. The primary mentor, or a member of the mentoring team, should have a successful track record of mentoring individuals at the candidate’s career stage.

The mentor(s) or mentoring team must demonstrate appropriate expertise, experience, and ability to guide the applicant in the organization, management and implementation of the proposed research. Because this CDA focuses on ePCTs for PLWD and their care partners, candidates must include expertise in leadership, organizational change, and/or active participation in the administration of HCS.

How to Apply Expand

Online application forms and instructions are available on the IMPACT Collaboratory site at: https://impactcollaboratory.org/cda/

Human Subjects and Data Safety Plans are NOT required at the time of grant submission. Successful candidates will be required to submit additional materials and receive approval by the IMPACT Collaboratory’s overseeing IRB and possibly its Data and Safety Monitoring Board (DSMB) depending on the nature of the research.

A budget detailing research-related expenses and salary support with an accompanying budget justification is required. The project period is for two years, and the annual budget in each year may not exceed $100,000 in direct costs. Indirect costs are capped at 8% of total direct costs.

Applicants may apply for additional funds, up to $10,000 per year, to support their research project. Justification for requesting these funds is required as part of the budget justification. These funds may not be used for salary or stipend support for the Candidate, Mentor(s), Consultant(s) or Collabortator(s).

** Please note there has been a change in the budget forms required in the application. Applicants must use the “PHS 398 Form Page 4: Detailed Budget for Initial Budget Period” and “PHS 398 Form Page 5: Budget for the Entire Proposed Project Period”, and include your budget justification.”

**Please do not use the “NIH Research & Related Budget Forms” as listed originally in the RFA.

Environment & Institutional Commitment to the Candidate 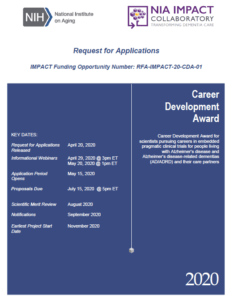